skip to main | skip to sidebar

In a constantly developing society, the artist plays an important stimulating role. Development implies breaking away from existing structures. To reach optimal artistic expression, it is crucial for the artist to be able to deploy himself or herself without being subject to the restrictions of civil morality. The objective of AVL-Ville is to create an environment where this is possible. To reach this goal, the rights formulated below are to be seen as absolute, without any exceptions. Living at AVL-Ville can be experienced as a hard and confrontational artistic life. However, this is the ultimate consequence of an honest and uncompromising existence.

B) The general committee is qualified to expel participants, if no amicable settlement can be agreed upon in conflicts.

In the year 2001 Atelier Van Lieshout realised AVL-Ville, a ‘free state’ in the port of Rotterdam, with its own constitution, currency and flag. It was a utopian village, where people could live and work in an ecological, autarkic way. Besides a large workshop where art works are made, the Pioneer Set, a mobile farm, would provide food. Alcohol and medicines were produced in a special workshop. Through creating their own energy resource powerplant and water purification system the free state was independent from other resources. This large-scale project forms a high point in the work of AVL; it was a culmination of all the works produced by AVL up to that time. This project provided a form of art not just to look at, but to be lived in and with. After a successful and tumultuous year, AVL-Ville closed its doors. 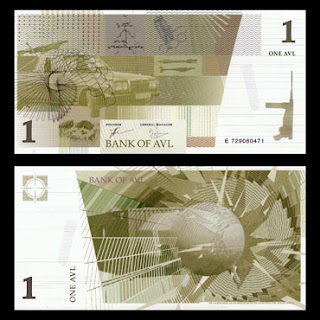 AVL designed its own money for AVL-Ville to promote the ideals of the Free State. If customers pay with AVL bills at the bar, the bar doesn’t need a liquor license. The value of the AVL money was not related to gold but rather to beer: 1 AVL is 1 beer, 5 AVL is 5 beers, 25 AVL is many beers and a meal and so on. AVL decided to adorn its currency with heroic symbols instead of the nondescript designs on the euro bills. 1 AVL is dedicated to weapons and bombs; 5 AVL to alcohol and energy; 25 AVL to sex and mobile homes; 100 AVL to the most important realms of food and farming. The money is functional while displaying AVL’s belief in heroism and ideals. 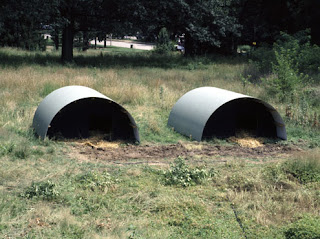 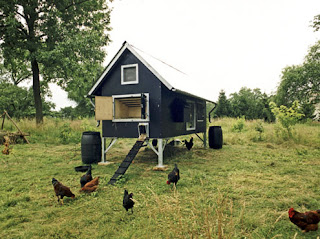 With the Pioneer Set, AVL created a prefabricated farm and equipment, which handily fits into one 40-foot shipping container. Individuals and groups can travel around the world, set up the farm at any location and live self-sufficiently. The set consists of a farmhouse, a stable, a rabbit hutch, a chicken coop, a pig pen, several tools, equipment and fencing. Pioneer Set is a sturdy construction which has been built to function indefinitely, without any need for repairs and extensions. The only things that have to be added and replaced are the farm animals. AVL’s goal was to make a farm set for survival – not to create a farm driven by profit or in competition with other farms. Pioneer Set is a fully functional farm that appeals to the imagination in its concreteness. The set fulfils a nostalgic, utopian and even romantic idea of living: longing to go back to nature, to be independent or even not to be a part of this world. 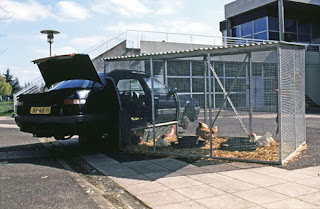 Alfa Alfa began its life as an Alfa Romeo 164. The car had put in a considerable amount of time as an AVL company car before its engine was taken out to serve as a generator. The body was lovingly restored in 1999 and converted into a chicken coop. To transform the car into a coop, AVL undertook a thorough study of chickens: habits, health, habitat and psychological behaviour. The results of the study were integrated into the final design; proper adaptations were made. The chickens have a run and feeder outside the car; their nest is located in the trunk; which can be opened to collect the eggs with ease. Human conveniences are happily united with chicken welfare in the Alfa Alfa. 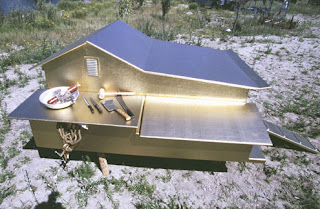 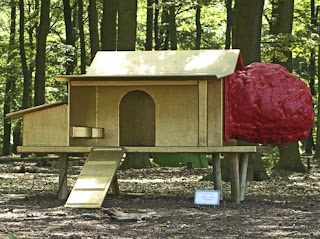 This ideal home for dogs has a living room, a bedroom and a porch with an unlimited supply of fresh water and dog food. A canine utopia, the doghouse was made for the biennial of Bussan in Korea, where dogs are on the menu; the unit’s storage place also holds the butchering equipment. 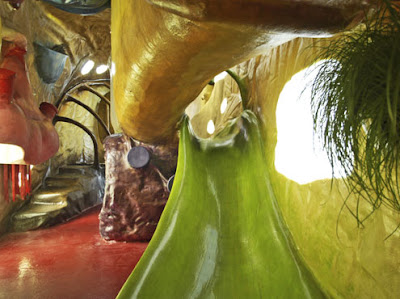 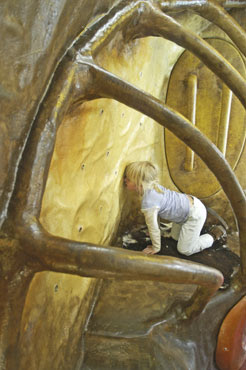 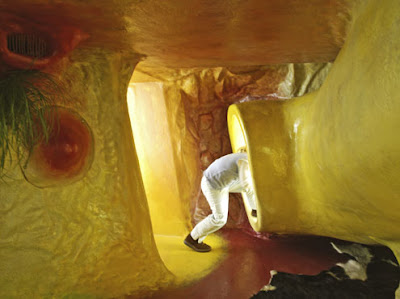 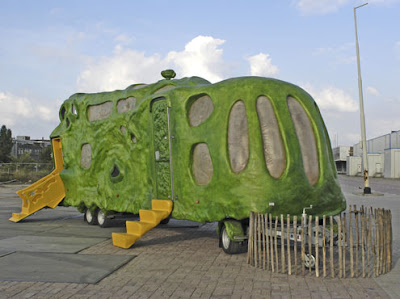 Satellite des Sens was commissioned when the city of Lille carried the annual title of Cultural Capital of Europe in 2004. Eager to include children in the celebrations, the organizers asked AVL to create a mobile unit, which could travel around to different schools. Once parked, the unit welcomed 12 children - aged three to six - along with an adult companion, and invited them to take another kind of trip: an artistic discovery tour of the five senses. The children can hear, see, feel, smell and even taste their way through the spacious green caravan to become conscious about the body's senses in a fun and informative way. The caravan's exterior - which looks like a bright green, friendly monster – is an experience in itself, stimulating the 5 senses. Created in close collaboration with a team of specialists – trailer builders, engineers, sculptors, sound artists and pedagogues – AVL's Satellite des Sens is a surrealistic dream object on wheels.

Michelle Nolan
A blog to share my observations of public territories in Belfast, my collaborative practice, upcoming events and other issues that I find interesting and important.